Irish Herbals.   (click on this link for easy reading) 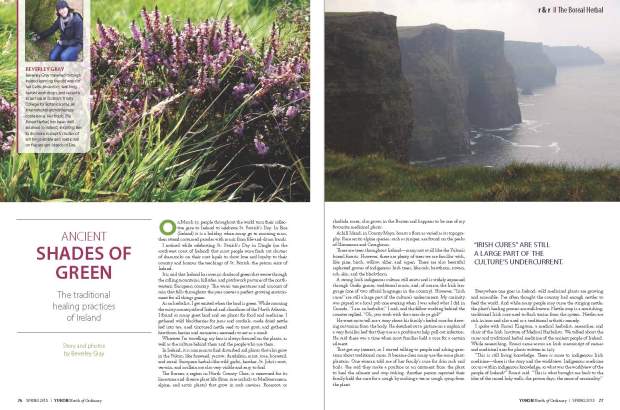 The traditional healing practices of Ireland

On March 17, people throughout the world turn their collective gaze to Ireland to celebrate St. Patrick’s Day. In Eire (Ireland) it is a holiday, when many go to morning mass, then attend costumed parades with music from fife-and-drum bands.

I noticed while celebrating St. Patrick’s Day in Dingle (on the southwest coast of Ireland) that most people wore fresh cut clusters of shamrocks on their coat lapels to show love and loyalty to their country and honour the teachings of St. Patrick, the patron saint of Ireland.

It is said that Ireland has over 40 shades of green that weave through the rolling mountains, hillsides, and patchwork pastures of the north- western European country. The warm temperatures and amount of rain that falls throughout the year creates a perfect growing environment for all things green.

As an herbalist, I get excited when the land is green. While roaming the misty countryside of Ireland and shorelines of the North Atlantic, I found so many great land and sea plants for food and medicine. I gathered wild blackberries for jams and cordials, made dried nettle leaf into tea, used tinctured nettle seed to treat gout, and gathered hawthorn berries and numerous seaweeds to eat as a snack.

Wherever I’m travelling, my lens is always focused on the plants, as well as the culture behind them and the people who use them.

In Ireland, it is common to find disturbed soil plants that also grow in the Yukon, like fireweed, yarrow, dandelion, mint, rose, horsetail, and sorrel. European herbals like wild garlic, heather, St. John’s wort, vervain, and mullein are also very visible and easy to find.

The Burren, a region in North County Clare, is renowned for its limestone and diverse plant life (from rare orchids to Mediterranean, alpine, and arctic plants) that grow in rock crevices. Roseroot, or

rhodiola rosea, also grows in the Burren and happens to be one of my favourite medicinal plants.

Achill Island, in County Mayo, boasts a flora as varied as its topography. Rare arctic alpine species, such as juniper, are found on the peaks of Slievemore and Croaghaun.

There are trees throughout Ireland—many not at all like the Yukon’s boreal forests. However, there are plenty of trees we are familiar with, like pine, birch, willow, alder, and aspen. There are also beautiful replanted groves of indigenous Irish trees, like oak, hawthorn, rowan, ash, elm, and the blackthorn.

A strong Irish indigenous culture still exists and is widely expressed through Gaelic games, traditional music, and, of course, the Irish language (one of two official languages in the country). However, “Irish cures” are still a large part of the culture’s undercurrent. My curiosity was piqued at a local pub one evening when I was asked what I did in Canada. “I am an herbalist,” I said, and the fellow working behind the counter replied, “Oh, you work with the cures do ya girl?”

He went on to tell me a story about his family’s herbal cure for drawing out toxins from the body. He sketched out a picture on a napkin of a very familiar leaf that they use as a poultice to help pull out infection. He said there was a time when most families held a cure for a certain ailment.

That got my interest, so I started talking to people and asking questions about traditional cures. It became clear many use the same plant: plantain. One woman told me of her family’s cure for skin rash and boils. She said they make a poultice or an ointment from the plant to heal the ailment and stop itching. Another person reported their family held the cure for a cough by making a tea or cough syrup from the plant.

“IRISH CURES” ARE STILL A LARGE PART OF THE CULTURE’S UNDERCURRENT.

Everywhere one goes in Ireland, wild medicinal plants are growing and accessible. I’ve often thought the country had enough nettles to feed the world. And while many people may curse the stinging nettle, the plant’s healing powers are well-known. Nettle soup is a nourishing, traditional Irish cure used to flush toxins from the system. Nettles are rich in iron and also used as a traditional arthritis remedy.

I spoke with Rosari Kingston, a medical herbalist, researcher, and chair of the Irish Institute of Medical Herbalists. We talked about the cures and traditional herbal medicine of the ancient people of Ireland. While researching, Rosari came across an Irish manuscript of names and medicinal uses for plants written in 1415.

“This is still living knowledge. There is more to indigenous Irish medicine—there is the story and the worldview. Indigenous medicine occurs within indigenous knowledge, so what was the worldview of the people of Ireland?” Rosari said. “This is what brought me back to the idea of the sacred holy wells, the patron days, the sense of seasonality.”

She works and lives by the ancient Celtic calendar, a pre-Christian Celtic system of timekeeping for each of the four seasons. Rosari honours the change of season with different plants. She also observes the importance of her surroundings.

“The land influences me because I am very conscious of sacred space. Some places are very potent, [such as] the faerie forts, which would not be touched even today,” she said. “The old stone circles, the wells, the holy mountains—these are all very sacred to our people.”

In Ireland, faerie mounds and forts are revered and are not to be messed with. There are many stories and legends about faeries, and expensive road detours have even been made throughout the country in order to avoid disturbing a faerie mound.

For Rosari, it is important to understand ancient Irish knowledge and how it integrates with modern medicine. “I think that traditional medicine worldview can never stay static. It always evolves.”

The ancient Celts, like the Aboriginal people of North America, believed that all things in nature were interconnected. Trees were venerated as sacred beings and identified as ancestors of human beings. Different trees had different traits and magical energies, including the power to heal.

Celtic priests, or Druids, utilized the ogham, a medieval alphabet used to primarily write an early Irish language. Each letter is named for a tree or shrub and is associated with a certain month of the Celtic calendar.

Celtic shamans believed that certain herbs held healing powers and used the ogham in their preparations. While concocting their remedies, healers drew letters from the ogham in the air over the mixture.

The old traditional ways are alive and continue to evolve in Ire- land thanks to family practices, modern-day herbalists, and the sha- mans of that ancient land. There are well over a hundred medicinal manuscripts writ

One thought on “Irish Cures Tradition”